The emotional swings of this drama (and I mean that in a good way) continue to bring the feels for me, and the actors get a chance to showcase their many talents. And yet we still don’t have a shower scene…

While I’m not exactly bitter that we don’t get a Gong Yoo or Lee Dong-wook shower scene (much), I am very much appreciating how both men get to shine in this episode. The mental soliloquy of Shin as he realizes what lies ahead both for him and his bride are no less poignant because the Reaper interjects telepathically that he can “hear” him. It’s humorous, but it also serves as a reminder that these two share a lot of things, most of which are not exactly happy.

I laughed how blue-flame hot Shin roasts the eggs and deathly-cold Reaper chills their beers – now that’s a fine partnership!

But all kidding aside, it’s just emphasized so much more how Shin and Eun-tak complement each other. I inadvertently referenced in the ep. 4 post (now edited) how she is just as compassionate to those who need her help, such as the student ghost. This is gonna sting – and I don’t mean when she pulls out the blade.

Though I wonder… why exactly does it have to mean that blade extraction = immediate death? Why can’t it be extraction = pick up your life where you left off, completing your 4 score and 10 (or whatever it might have been)? Writer, throw the girl a bone! 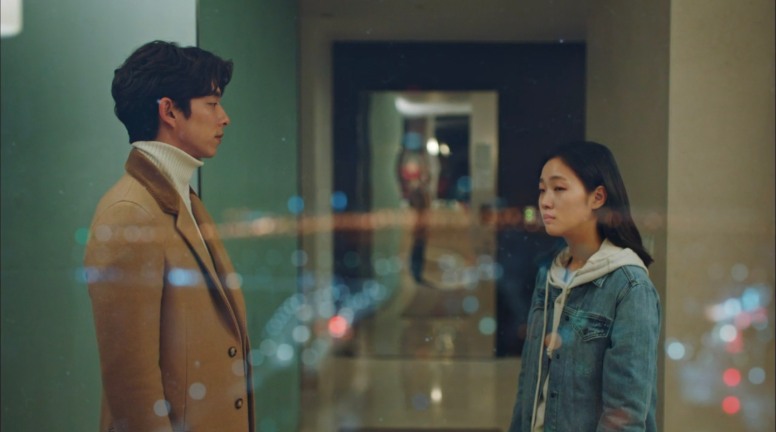 What an absolute beauty though this show is to watch! I enjoyed the pretty in Legend of the Blue Sea just fine, but if we’re comparing the two, there’s just more going on here for me to invest in emotionally. When Shin goes to her lonely hotel to bring her home to his house and, when asked if he loves her, simply says he can if that’s necessary, it was such a blow to the ribcage because we’ve already seen how this immortal has discovered love for the first time ever in his life (beyond for family and country), and yet the rain streaming down the window pane seems to say something else to Eun-tak. She has had so little love in her life that it seems so believable that he is sad to have to pretend to love her. <sob>

But cohabitation has its charms! We get to see him act like a fool for her, jealous like crazy over her pointed attempts to befriend the Reaper, to the point that when she berates him for not granting the third of her wishes (a boyfriend) he shouts so impulsively that she has one, him, right in front of her! Whee!

I found it interesting too that just as Shin really ought to be pulling back from the real world both he and the Reaper (and would he just pick a name soon, please?) are getting more invested in living today, getting smartphones for the first time ever so that they can communicate with the women in their lives. When Deok-hwa brings them their new phones and Shin, in his superior way, tells his junior caretaker to tell the Reaper all about it because he’s the slow one, then is the first one to hop up when Deok-hwa suggests they go to the Google Play Store I laughed. But seriously, Sunny’s going to need more from the Reaper soon or all the handsome in the world isn’t going to keep her interest.

Speaking of Sunny, just exactly why does she have no customers? And how does she keep that store open?

Finally, cliffhanger number 5; what does the vision sequence mean? Is he imagining the future Eun-tak? Is this like a page from Dicken’s Christmas Carol and some how he’s seeing the vision of what might be?

This enquiring mind wants to know.