This show is NOT helping my Park Seo-joon affliction AT ALL! Yes, he’s playing a character, just one of many lovely characters he’s played, but having seen him in action on the Yoon’s Kitchen reality show (and it seems very unscripted) I think his basic goodness and yes, manliness, really shines through. 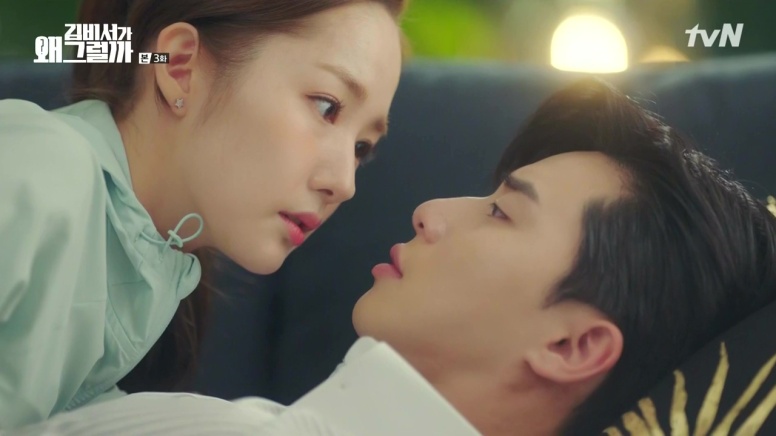 Park Min-young is really the perfect partner too because she comes across so intelligent and feminine and delicate that when he sits her on his lap you just have to swoon at the rightness of it all.

Of course, spoilers after the jump, because I have lots to swoon about!

First, let me say I have no problem with the pace of this show. I’ve seen comments on Twitter saying that once it becomes clear to both that they love each other that there’s not a whole lot “new” going on. I disagree pretty much entirely with that notion.

While it is true that both of them appear to first privately acknowledge how important the other is to their emotional well-being, it is clear that they are both cautious – he because he knows his past history and always has and wants to spare her any sort of similar trauma and her, because while she has suspicions about said past, she doesn’t know the truth until after recognizing her love for him but she does know that there will be mucho gossip about a Vice-Chairman and his secretary indulging in an office romance – and they are revealing themselves to each other and learning to be a romantic couple at an appropriate pace. It would be a much different show if they had gotten the cards out on the table sooner, and far less Korean in tone. Psychological practice and mental health treatment are very much stigmatized still in Korea, and to get everything out in the open sooner would be false. And, if they had done so, they would no doubt have had to shoehorn in some attempted kidnapping (take 2) or another melodramatic subplot to fill in the remaining time. No, he has seen what damage has happened in his family, she is too precious to him to let something similar happen. And once Mi-so realizes that he is indeed her “Oppa,” she doesn’t just blurt out that she knows the truth because she also knows that he is still dealing with the trauma even if he hasn’t come right out and said so. (Swoon alert: how freaking adorable was he when he wanted her to call him Oppa?)

As you mentioned, Camelia, it was no surprise that he would take the trouble to go to Jebu Island to do what he could to start making his connection to her sisters and set their minds at ease regarding him and his seriousness about Mi-so. We’ve seen his pronouncements about how smart and driven and dedicated he is when it comes to fulfilling any task in front of him so it is no surprise at all, but we get to see him be all those traits at the same time he spends all his energies in a loving way, with little thought to his own consequence.

What’s interesting to me is that now the truth has come to light about the kidnapping and Seong-yeon’s role in what happened afterward, he doesn’t change his (truthful) boastful ways. He still talks about how smart and handsome he is, etc. In a way, it’s kind of like a healing mantra he’s employed all these years when he alone carried the burden of truth and when I think of it that way, it kind of breaks my heart a little bit. How exhausting it must have been to be shouldering all this responsibility! No wonder he sleeps like a log once Mi-so lets down her guard – but of course, the other consequence is that once he shares a bed with her to watch over her and make sure she’s not having nightmares he’s not sleeping again because he is having “ero” fantasies!

Swoon alert: I have to say I love it that he’s pretty open about wanting more in their relationship, and while she’s a little nervous about that big step, she doesn’t run away or get all prim and proper offended maiden about it! That first failed attempt on the sofa (WINDOWS EVERYWHERE!) was very sexy, with him untying that blouse tie and upper buttons… Is it hot in here? (Can you imagine the filming of these scenes? How can they make it look so natural?) It may have been embarrassing to film that scene and the next, but all praise for their professionalism. I loved the fact that he was very explicit about what would happen when she showed up at his house (rather than hide at home), looking lovely as can be, and when he gives her the choice, she makes it. What a quietly sexy moment that was when she walked to the doorway, turns to look at him, somewhat hesitantly, then smiles sooo sweetly! It was also very gratifying that she was the one unbuttoning HIS shirt and after he takes it off with that flourish (not gonna lie, I replayed that moment a couple of times and paused to appreciate his commitment to his workouts 😍 ) her reaction was perfect! That slight look away, as if to say, “I am overwhelmed that this man is here with me and that I’m doing this with him and I love him…” whew!

But back to the kidnapping storyline: it played out almost exactly the way I thought it would, except that I didn’t expect him to have taken the steps he did to fake his amnesia and let his brother have the “glory” of the kidnapping trauma as a way to protect his mother from her own emotional collapse. I think that they have wisely held off on the Kumbaya healing moment with the 2 brothers, and Yeong-joon hasn’t returned to his original name of Seong-hyeon. That would be fake, IMO, as they have had over a decade (more, when you factor in Seong-yeon’s jealousy of his gifted younger brother) of deep trauma to overcome. It just doesn’t work that way IRL.

The way he reveals how much solace he must have gotten from Mi-so being with him in that trauma was also a nice touch. I think him having to be the strong one, the one to protect her, was something that gave him courage. To know that he’d found that Korean equivalent of Barbie’s Dream House and saved it for her all these years was a very cute gesture, just as his heart was touched as he read about how little Mi-so had saved caramels for her Oppa, and wanted to see him again. I enjoy very much how this is a story of equals; maybe not so apparent because we see how hard she had to work to learn all those skills to be qualified to work with him, but little Mi-so was smart, just disadvantaged. These two can work and play together.

I really appreciate too how careful Mi-so is for him and how he feels and doesn’t rush in to try and “fix” things. I know that she could only watch from outside when he had that conversation with his parents at the office and the truth was finally revealed. It would have been so hard for most of us not to rush in and hug him when he’s trying not to cry, but she has to let him work through things on his timetable. In Korean culture, you don’t interrupt someone who’s talking (no quick rebuttals), you let him/her finish talking and then you get a chance to talk. This is kind of the same thing. And didn’t it feel like a slap in the face when his parents left the office and his dad just kind of dismissively grunted at her and left? His mother, who I think knows that her son(s) are interested in Mi-so also doesn’t do much to acknowledge her. It stung, but in a way, it seemed appropriate because this is the Lee family history they have just dealt with and it is a PRIVATE matter.

Park Min-young is, as I’ve mentioned, such a perfect foil for Park Seo-joon. I love how she took the initiative and kissed him when he was still a little traumatized to complete his kiss. Those slim hands of hers on his face… she has beautiful hands, doesn’t she? What I love too is when she goes into her Perfect Secretary mode and calmly says, “yes, that’s correct,” in a voice straight out of professional voiceover territory. I can hear her saying “dear customer, the person you have called is unable to answer your call…” I hope they have a chance to work again soon, but she clearly will have her pick of handsome leading men. Lucky girl!