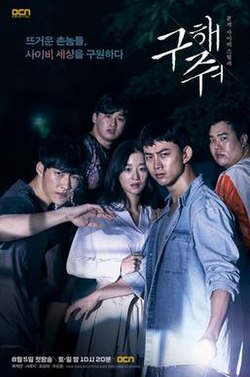 I was really charmed by Woo Do-Hwan and I wanted to see more of him. Many people have mentioned Save Me as one of his earlier dramas so when I accidentally came across it I decided to check it out. My heart sank when I saw that the lead was Taecyon..as you know he is not one of my favourites..though he might be a sweet boy he’s a terrible actor in my view and I just can’t understand why he keeps getting such plum roles..but nevermind..I decided to overlook it. One other thing that made me hesitate was that I saw that it was about a cult and all it’s  activities in the small town..didn’t relish watching such obvious manipulation but I do really like the actor who plays the cult leader. First thing to stand out was that they gave him totally white hair and it just visually shocks the eyes and gives you warning that this isn’t an ordinary villain. He says and does all the “right” things but you can just see (unless you have already joined his cult) that there is something dark behind those eyes…

Back to our main characters..the group of highschool friends who like to hang out..who obviously care about each other but who carry different baggage as well.. Do-Hwan’s father being the town drunk..Taecyon’s father being the governor..each with their own pressures but basically good guys..

Then we meet the main family…consisting of the parents and a teenage son and daughter.down on their luck..scammed out of their savings and left without even a home or job..they come under the radar of the cult and little by little..in the most innocent of ways..especially after the suicide of the son who is bullied..the family falls apart and are at their most vulnerable..perfect victims to unscrupulous villains.

But..it’s not only about the obvious villains..it’s about others who aren’t above putting ambition and their own well being above justice and aren’t afraid to corrupt anyone who will help them do it.

I’ve only watched three episodes but I’m not sure I will continue..it’s toooooo creepy for me right now..and it’s unbearably sad and I know there is more to come before..hopefully..things get better…It’s not the first time of course that we see the rich man getting  away with murder but it’s especially hard to see it here!!