I finished watching What’s Wrong With Secretary Kim — all-around delightful! Though there was one fatal flaw, imo… but the protagonists were lovable and interesting. Our heroine with her bright plastic secretary smile, lol, and our hero with his shameless narcissism, yet puppylike pursuit of her, haha.  I’m so surprised they never strayed into #MeToo territory not once, given the premise!

Mild spoilers after the break…

END_OF_DOCUMENT_TOKEN_TO_BE_REPLACED

I thought I’d better do a little drama housekeeping before I started in on Life, so I turned my attention back to I’m Not a Robot this weekend. I was about half-way through it and had stopped because it was still on-air at the time and getting to the more angsty part of the story and thought I’d rather wait until it was completed so I could work my way through the heartache parts and get to the good stuff at the end. But other shows kept interrupting so I was wondering if there was something about the show that was holding me back for some reason. 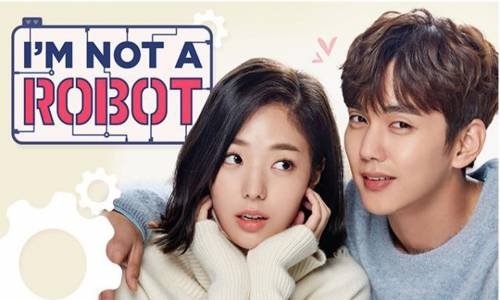 I’m happy to say that I was charmed anew by the ‘boy with no friends’ (he has a psychosomatic life-threatening allergy to human touch) and the bright girl who plays the robot who comes into his life as a companion. But… After having just come off the very gratifying romance in What’s Wrong with Secretary Kim? I will say that there things that left me wanting a little more. I think I’ve been spoiled. I’ll save the spoiler-type reasons why for after the jump, below.

What really works in this drama, though, is the pairing of Chae Soo-bin and Yoo Seung-ho. They’re both playing characters about 4 years older than their actual ages, and that youthfulness generally works for them. She is once again smart and sassy, as in Strongest Deliveryman, but she’s a lot sunnier and more sweet-tempered in this character. It’s novel to have a character who wants to be a hands-on inventor and is focused on achieving her goals, even if she doesn’t have the financial wherewithal to make and promote her ideas. She also has the courage of conviction and when someone in her past doesn’t give any consideration to her dreams, she has the sense of self-worth enough to leave him without explanation or drama. This could easily have been a “Candy” role, but it never is; even if he’s a wealthy CEO he never bankrolls her dreams and that’s never on her agenda either.

The fact that the “other” is Uhm Ki-joon in a role for which he is highly unsuited as he just looks too much older at 42 than his ex, Chae Soo-bin’s character Ji-ah, who’s 24 playing 28, that makes his character’s age of 34 just plain jarring most of the time. That he’s made the robot look and behave like Ji-ah and is trying to figure out where he went wrong in their relationship because he wants her back is the part that makes me wish they tried a lot harder in their casting of this role. It’s not that he gives a bad performance, I just don’t want to see him in that triangle.

Yoo Seung-ho is about a year older than Chae Soo-bin, and they work well as a result, even though there are times when I want to scold myself when he looks young and vulnerable and boyish when just moments earlier he’s been very mature and sexy/playful. He also, I might add, has a nice lighter baritone voice which adds to his charm. As he gets older he’s less the “Baby So Ji-sub” he once was and is more his own persona, but oh, those killer side-ways glances he specializes in! Plus, he and Soo-bin do some good kissing once the awkward firsts are out of the way.

The show spends a lot more time focusing on the relationship between his relationship with his robot, and that’s a wise decision because they work the best. The business machinations at company HQ work less well because they are a mix of silly shenanigans and serious criminal activities — which are you, Show? Are you playful or not?

Of note, also making an appearance in this one is Kang Ki-young, who was Park Seo-joon’s friend in Secretary Kim, though here he plays a former childhood pal who may/may not be a bad guy. He is more fun when he’s snarky, but he does a worthy job here.

All in all, I generally enjoyed the show, but… Mild spoilers follow.