There aren’t too many dramas that start off by killing off the main character, are there? Or show him (apparently) steeped in swirling black clouds of demon magic amidst all hell breaking loose, but that is how we are introduced to the unforgettable character of Wei Wuxian, aka Wei Ying, aka the Yiling Patriarch and the hero of The Untamed.

This drama, even with its flaws, has been one of the more exciting dramas I’ve watched in recent years, for two reasons: the first is the coming of age of Xiao Zhan, playing Wei Wuxian, as this production rests completely on his youthful shoulders. No offense meant to his costar Wang Yibo, but barely a scene goes by without long dialogue sequences and interactions requiring Xiao Zhan to play the heart and soul of the drama and he delivers. The purity and truthfulness that he bestows upon Wei Wuxian is a sight to see. I know, I think I took hundreds of screenshots to try and capture just how much he gave to every second of his portrayal.

I will also give kudos to Wang Yibo, playing the correct and proper Lan Wangji, aka Lan Zhan, aka Huangung Jun, and Wei Wuxian’s true friend (they are Wei Ying and Lan Zhan to each other, so those are the names I’ll use to refer to their characters’ actions), or soul mate in the BL original story. He’s required to be the near-silent, stone-faced foil to the irrepressible (“Shameless!”) Wei Ying, but still convey the bond he feels with this brash counterpart. In interviews the two have a clear bond and mutual admiration society; Xiao Zhan has said that he thinks Wang Yibo had a harder role even with so few lines because he was called upon to act so subtly, with few facial expressions, and there is a great deal of truth to that. Unfortunately, as this is a dubbed drama we do not hear his voice in the production, nor Xiao Zhan’s (though his voice actor does an excellent and much closer job matching Xiao Zhan’s voice).

The other reason this drama worked for me is the successful (IMO) reworking of the tale to remove the BL elements that the censors would block and still tell a story of brotherhood and indelible bonds and make people care what happens to these two young men and want to see them never separate. (As for the BL purging, the production team does manage to get in a few subtle nods to the source material, such as the ‘bonding over bunnies’ references; apparently there is a rabbit deity that has been adopted by the LGBT world). 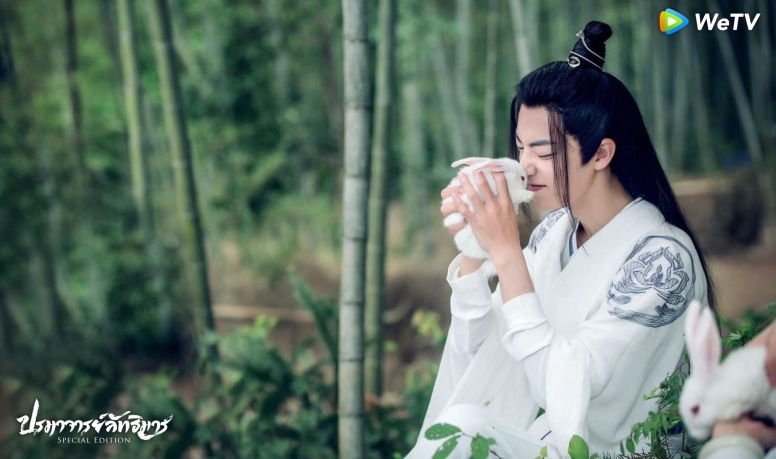 The drama tells the story of Wei Ying; adopted into the Jiang clan and “brother” of sister Jiang Yanli and brother Jiang Cheng. He’s not treated with universal love in the household, but he grows up to be talented in talisman work and swordplay. The three youths travel to another clan’s holdings for training and clan bonding exercises and there he meets Lan Zhan, the second son of the clan leadership and sparks fly. Lan Zhan’s older brother encourages their friendship because he sees in Wei Ying the characteristics his younger brother is missing and needs.

Unfortunately, this tentative friendship is cut short when a rival clan gets all greedy over accumulating wealth and power and territory (total world domination kind of stuff) and wants to use an evil demonic talisman to obtain their hearts’ desires. The upright Lan Zhan and anti-bullying tyrants inclined Wei Ying are challenged to prevent this mayhem. Things, shall we say, do not always go as planned. But don’t they look great setting out together?

I won’t get into the plot details too heavily so as to avoid spoilers, but I’ll address some where they highlight strengths and weaknesses of the drama. The major weaknesses first: some of the CGI for the ‘worlds’ they travel to are pretty cheesy. And some of the cast are given to highly melodramatic face acting, such as the green actor playing Jiang Cheng (the often jealous and thoughtless ‘brother’ of Wei Ying), and most of the villains of the show, particularly the characters Xue Yang and Meng Yao. The latter is very clearly playing his role as if this is a full-on BL drama.

There are some cheesy demonized zombie looks that drag down the beautiful costumes worn by Wei Ying in particular, and others (and can we talk about the hair?) In particular, the actor playing the loyal Wen Ning gets the short end of the costume stick, but he doesn’t let that get in the way of a few pivotal scenes that he has late in the drama. I heart Wen Ning. 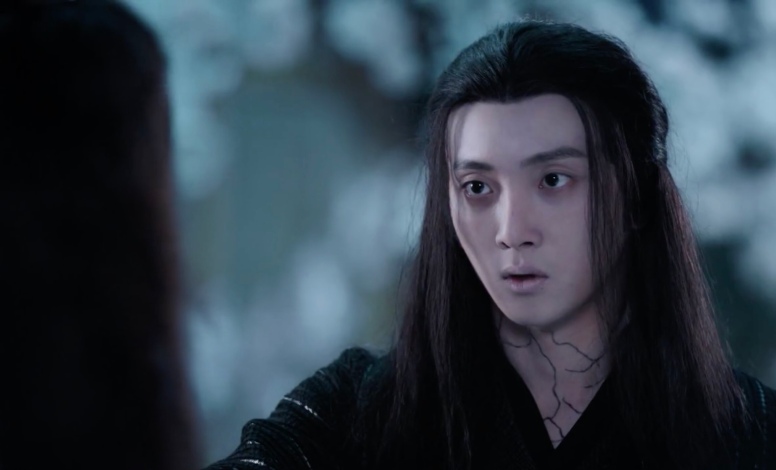 There are so many things that the story does get right though, that this is a drama worth seeking out. It’s on Viki and Netflix, but you might also look for the Special Edition packaged on YouTube by Tencent with a more satisfying ending edit. (Not to say the Netflix/Viki edit ending is bad, but the Special is better.) Then, once you’ve finished The Untamed, you’ll want to dive into Joy of Life and any other Xiao Zhan content you can find because you will be obsessed. Oh, and BTW, he’s a pretty fine young singer too!